7 has always been a very mystical and secretive  number. Some even say that there is hidden power in the 7. Interesting that the original slot machines have “lucky 7s” as a special winner and gamblers  love repeating 7s. But why?

Not only is 7 an interesting, mystical, and perhaps lucky number, but it could also be classified as a holy number, holding the power of perhaps the universe or God in its mysteries. Think of the most known stories in the world. In the Bible, God created the world in 6 days and rested on the 7th. In the Torah, the universe is comprised of 7 heavens. In the Quran, there is constant mention of 7 samāwāt, meaning celestial spheres or heavens. In ancient Hindu texts called the Puranas, the Brahmanda is divided into 7 upper worlds and 7 lower worlds. What is the secret with the number 7?

In almost all known fonts, the number 7 always slants up to the right, like a chart that is continually increasing. Imagine a stock market chart that is rising exponentially. The 7’s rising-to-the-right line can be considered a compounding growth of the numbers 1-2-3-4-5 and 6. Just as God continued to compound and build upon the world he formed  from the first 6 days of creation, the 7 demonstrates that same increase upon itself. As God rested on the 7th day, so does the 7. The 7 turns back at the level it just reached, but does not slope back down or up. 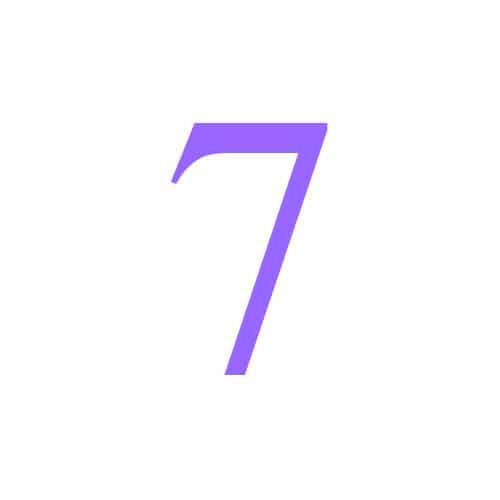 Instead, the top line of the 7 retraces its steps to the left but at the highest level it reached with its initial slant up and to the right. The number 7 in most glyphs or typefaces has a serif (a slight projection at the end of a line or stroke). Notice the downward turn of the serif on the very top left of the 7. The 7 by sheer nature of its shape is introspective, introverted, and self-reflecting; admiring its own right-upward growth.

Symbolism of the Number 7

The number 7 can symbolize perfection and completeness. From the 7 heavens to the 7 days of creation, 7 can also be deemed a holy number as these ancient texts are of the most sacred in the world. Not everyone is meant to understand its power, thus 7 can be secretive and esoteric.

Anytime someone resonates with the number 7, they may be someone who is often times quieter and respects/follows their inner feelings. The 7 is intuitive and understands where its been because its path is crooked back upon itself. The 7 can symbolize wisdom  and knowledge, as it is usually seeking truth in the world, just as God reflected on the 7th day over all he created. (Again, the top line of the 7  is above the slanted line and oversees all it created.)

As you continue your quest in knowledge, please research our page on Gematria. More of the secrets will be unveiled when you have deeper understanding of letters and numbers and words. Visit the post about Gematria and read this post again 😉